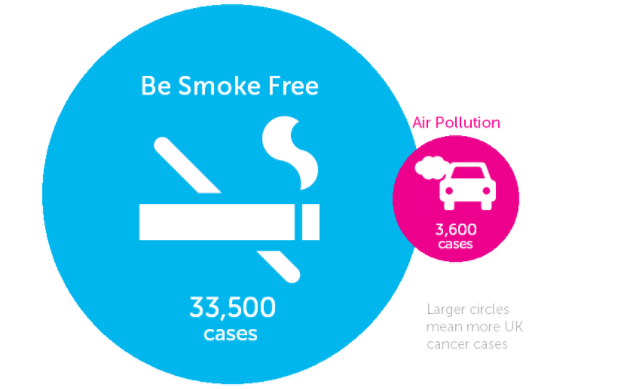 Pollution has become common and more toxic than ever. The Earth is suffering from all kinds of harmful pollution, of which air pollution is the most common and widespread. There are numerous severe side effects of air pollution, which include a higher risk of cancer. Cancer takes different forms, but the one caused by air pollution is lung cancer, a disease that can be treated only in the early stages. After that, it is often incurable.

According to recent studies, if pollution is not controlled in time, cancer risk can increase by up to 20-30%. This means that more than half of the world’s population might suffer from the dangerous disease if environmental protection is not made a top priority. Hence, it is essential to take preventive measures sooner rather than later.

Below is a list of 5 pollutants that are the biggest causes of cancer.

The most common source of tobacco consumption is smoking. It was proven long ago by scientific experts that smoking causes lung cancer. However, tobacco is also a major cause of air pollution. Tobacco is one of those pollutants that most people are generally aware of, but still fail to acknowledge or understand the dangers. One of the biggest threats to the planet’s wellbeing is tobacco, which leads to cancer and other breathing problems.

Radon is a radioactive gas that occurs naturally in soil and enters homes through cracks in basement floors and walls. It is harmful to breathe air that contains high levels of radon, because over time it can cause cancer. People are becoming more aware of the harmful gas and its dangerous side effects and are taking precautionary measures to avoid the risks of cancer.

The exhaust from vehicles like cars and trucks is so common that health conditions like asthma are becoming common among the general population. This is why numerous ways of getting rid of exhaust have been suggested and applied by local governments – especially recommendations that people use self-propelled modes of transportation such as walking or cycling.

Industries that manufacture fertilizers and other chemicals for agriculture and other businesses often emit harmful chemicals into the air, and some of these substances have been linked to cancer. These chemicals mix with air and spread widely in the area, affecting vulnerable populations.

These 5 pollutants are manageable to some degree, and precautionary measures can be taken to reduce dangerous side effects such as cancer.